IOWA CITY, Iowa. (KCRG) - There are a lot of Luka Garza fans in the stands at Carver-Hawkeye Arena these days but his biggest fan is his dad, Frank, who never misses and sits in the front row.

"The only one I missed was in New York." Frank Garza said following Iowa's game against Nebraska. "That was because of the snow storm that they had there I was just stuck on the freeway and so I had to watch it on the app."

"He's more than a dad to me. He's a coach and he's kind of a best friend." Luka Garza said.

"I go to him with any problems that I have on and off the floor, the close relationship I have with my dad is the reason I am who I am today and its the reason I'm the player I am today."

Frank might burn more calories watching a game than Luka does running up and down the floor.

"Well you have to remember he's half Yugo. Yugoslavian, and those are some people who are intensely fabulous athletes. {Isaac} Newton said I don't know if it was his third law of motion I cant remember which one it is. In order to move forward you have to leave something behind, and so what it means to get better at basketball is you have to give up something." Garza said. "I'm not going to go to that recreational thing I'm going to go in the gym, so you have to give something up to get ahead."

"Just being around him all the time as a kid I think he's contagious with his energy." Luka said. "You know any room he's in everybody knows like he's in the room. He's always like talking and always getting people involved and hes that type of guy so I think I've learned from him"

"Constantly I'm apologizing to Maggie because I'm either elbowing her or just having some reaction she doesn't know whats happening so I'm constantly just trying to apologize for being too loud." Garza said.

"He's always apologizing for hitting me, but he's just talking about how Luka's playing and how good he's doing, just lots of fun stuff." Mynderse said.

Frank played college basketball at Idaho and knows a lot about the game and has helped mold Luka into the player he is today.

"Well talk about the game, its something we talk a lot about and strategize on and we prepare and do different things for the game but that's been our whole lives together." Garza said.

"Anything that's real, it was imagined first because our actions are a manifestation of our beliefs so he's {Luka} been working a lot on that and that's what you are seeing here. He's prepared himself to be in this role."

After the game Luka signs a lot of autographs and so does his father.

"It feels good, Imean what's that saying? The fruit of your own labor is the sweetest. People are just friendly, I mean Iowa is friendly so I like it from that standpoint." 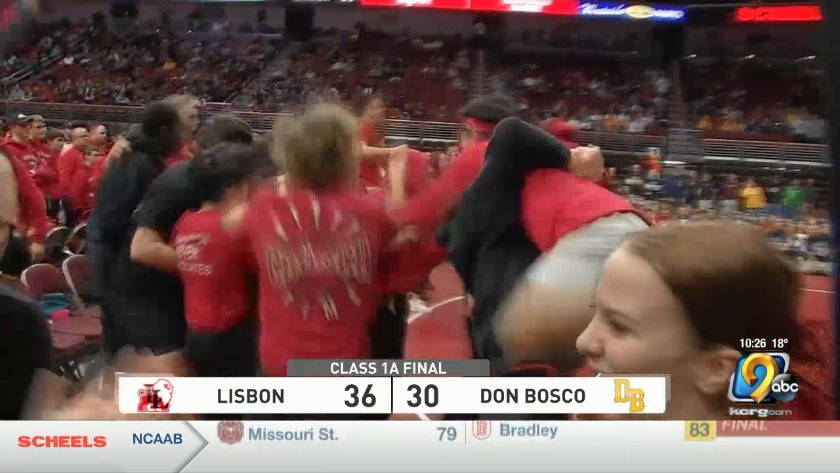 Waverly-Shell Rock finishes as 3A runner-up, falls to SE Polk