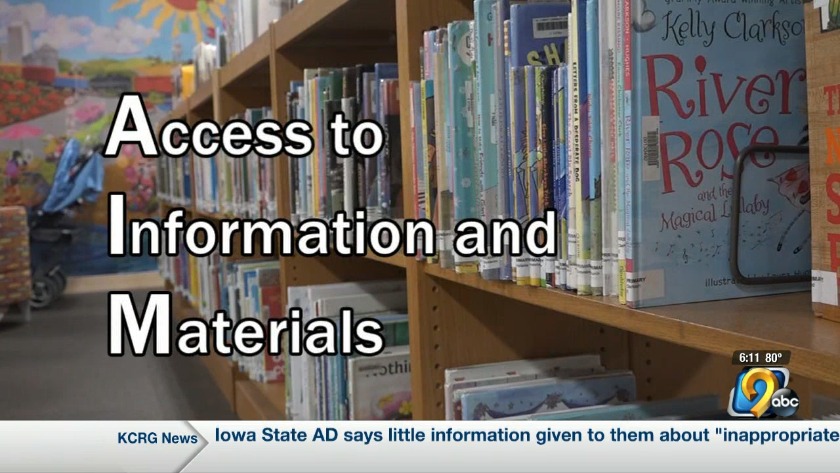 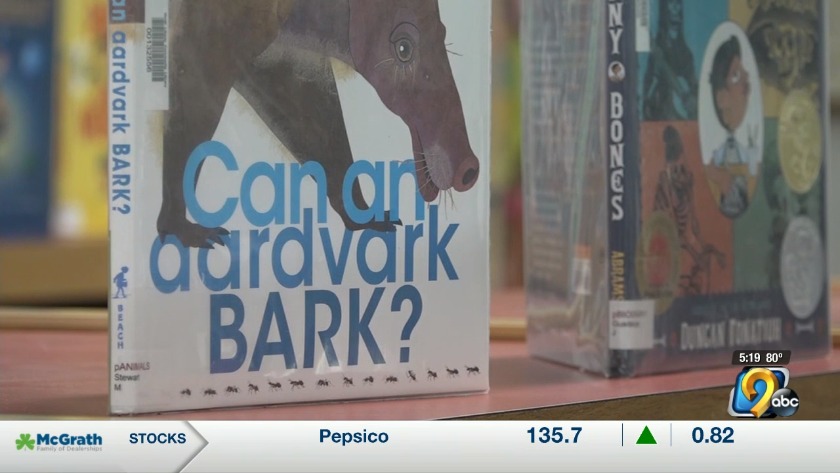 IOWA CITY, Iowa (KCRG) - One of the largest school districts in eastern Iowa wants to help students have better access to the library, and leaders of the project are "aiming" to start a new program to do exactly that.

Rex, a dinosaur featured in the "Toy Story" movies, is found (in stuffed form) holding a library card at the North Liberty Community Library on September 17, 2019. Soon, students across the Iowa City Community School District can use their ID cards for library access. (Aaron Scheinblum/KCRG)

The program that features "AIM" cards would allow students to use these identification cards as a pass into the large public libraries in the area. It essentially goes hand-in-hand with area libraries going fine-free, and helping students with literacy and improved access to learning materials outside of school.

Students will have the ability to take out three things from each of the public libraries in Coralville, Iowa City, and North Liberty. This means that students could check out up to nine educational materials at a time, like books, audiobooks, or potentially documentary or fact-finding movies.

Students will have to follow the rules of the library as far as when to return those materials, but they will not face fines for returning things late, losing materials, or damaging materials. The libraries also reserve the right to block a student from checking materials out, but that ability can be reinstated up to three times per year.

The school district and its students will also have access to certain digital resources like e-books and audiobooks online, a cost-saving measure for the district that will be covered by the libraries.

The district and area libraries are still figuring out some of the technical details to make the program work properly, and say it should be ready to go sometime during the school year.

"We're talking 14,000 students, we want to get library cards in the hands of every student," Jennie Garner, the Library Director for the North Liberty Community Library, said. "It's all about access."

AIM is an acronym for Access to Information and Materials- and the AIM card would turn a student's ID card at school into a library card outside of it. Currently, elementary school students do not require an ID card to go to school, so the implementation of the program would now provide them to have ID cards.

The move was approved by the Iowa City Community School Board at the end of August, and staff with the district say this will prove to be a good decision.

"The public libraries are accessible after school hours, they're accessible during school breaks," said Kristi Harper, the district's Library Coordinator. "We'll make it really handy for the kids."

The AIM program has been used in much larger cities across the county, but the program in the Iowa City district will become one of the largest in the state. Staff at both the public libraries and the school district said the partnership is key.

"Being able to reach those kiddos that might otherwise not have the access and may have academic challenges, hopefully, that can help give them a little leg up," Garner said.

"The more opportunities our children have to read, not just during the school day, but in the evenings, on the weekends, during winter break, summer break, that can only be good," Harper said.

Library staff clarified that while students will not be charged fines for late materials, the new regulations will not serve as a license for students to take whatever they want as long as they want. Library staff will work with the district to ensure that the protocol is followed.