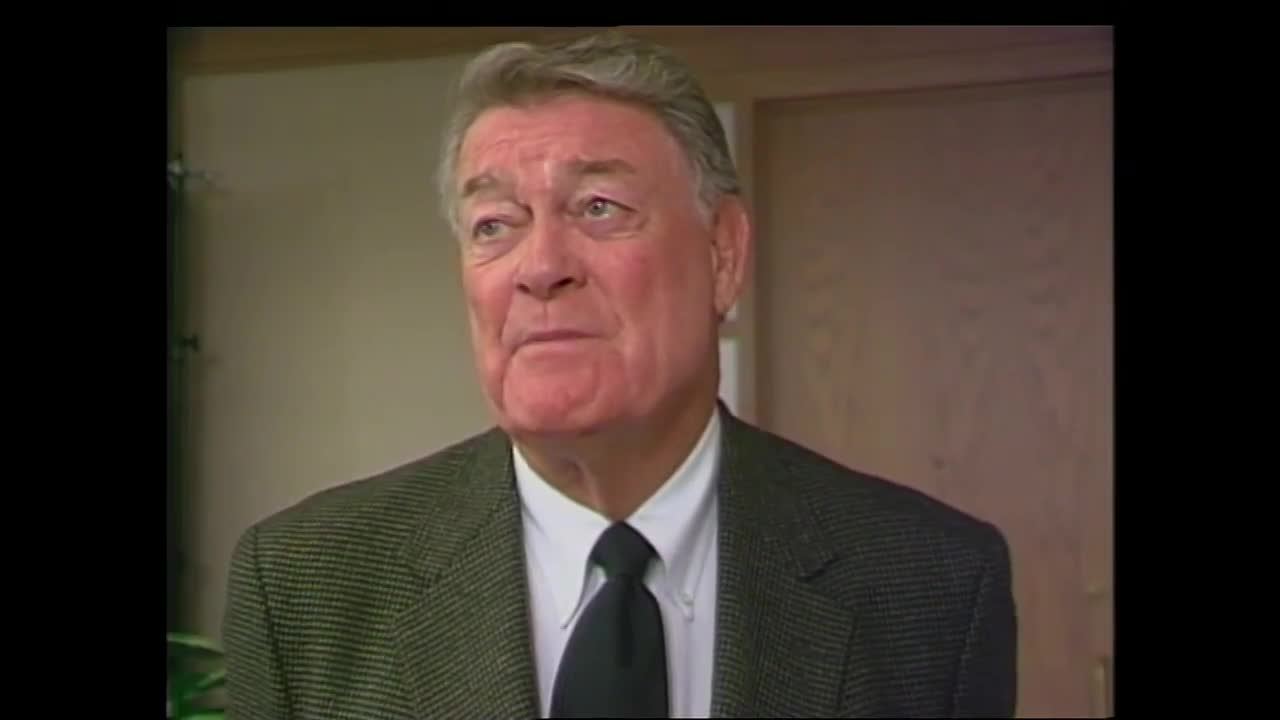 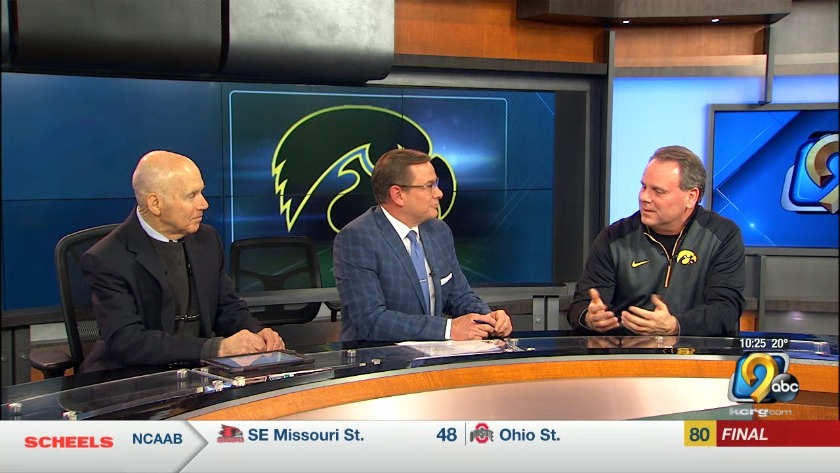 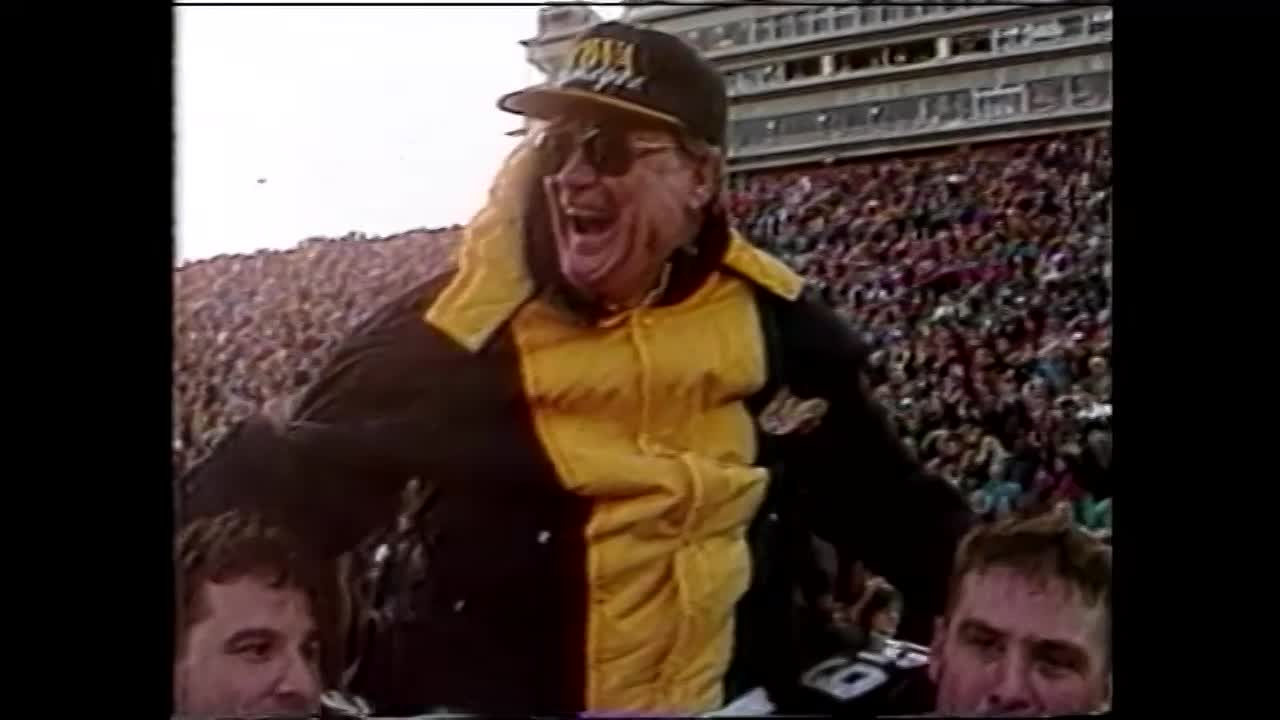 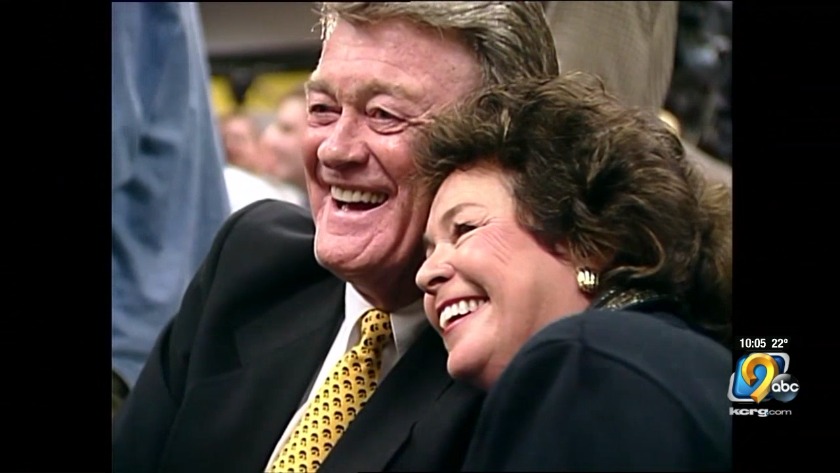 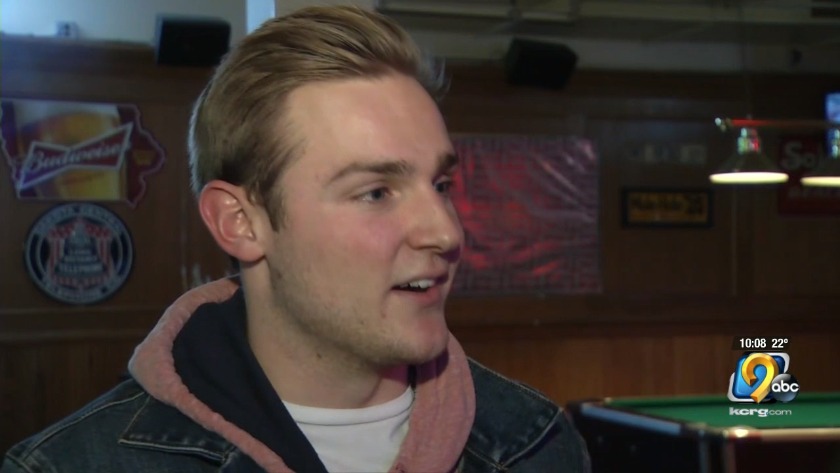 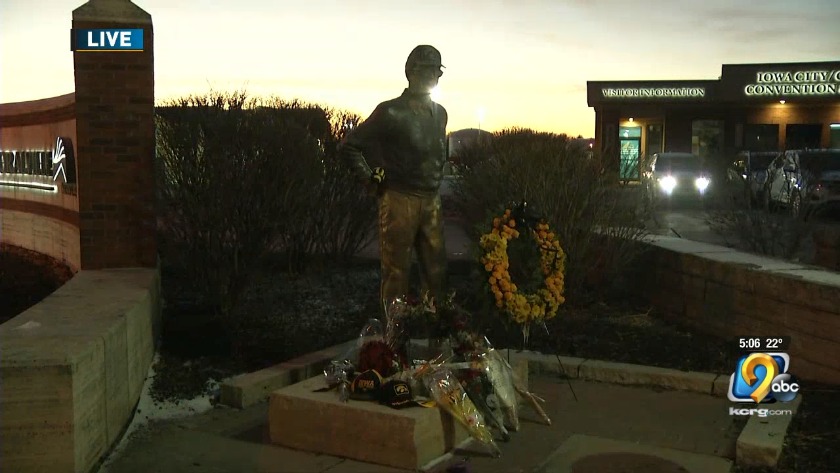 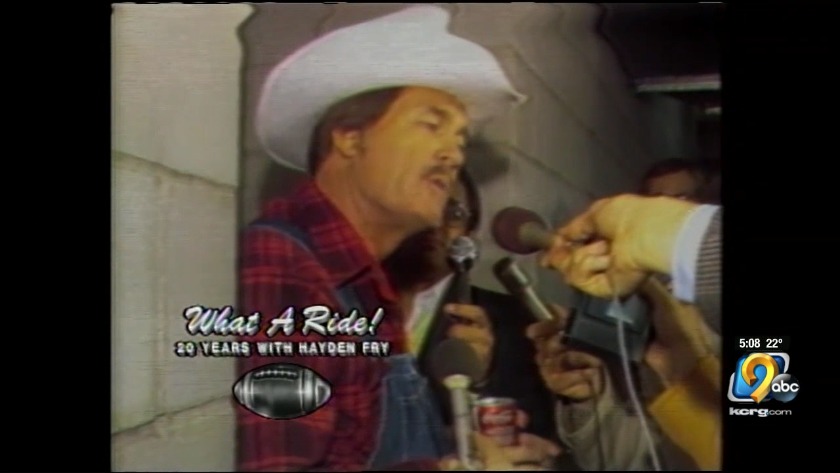 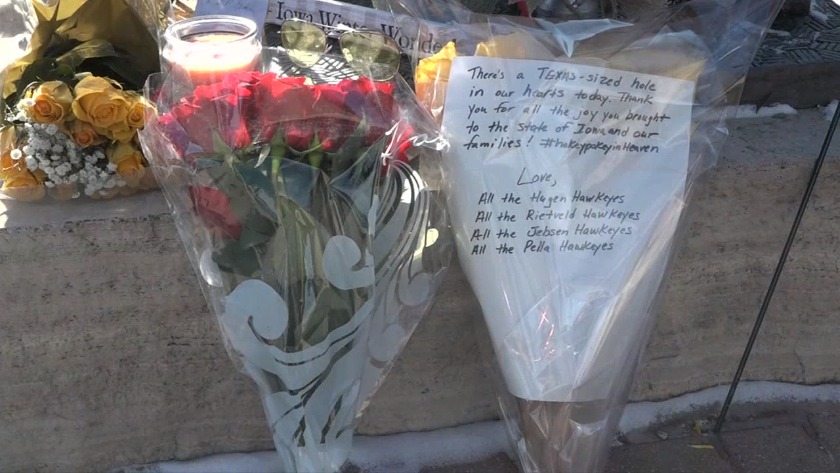 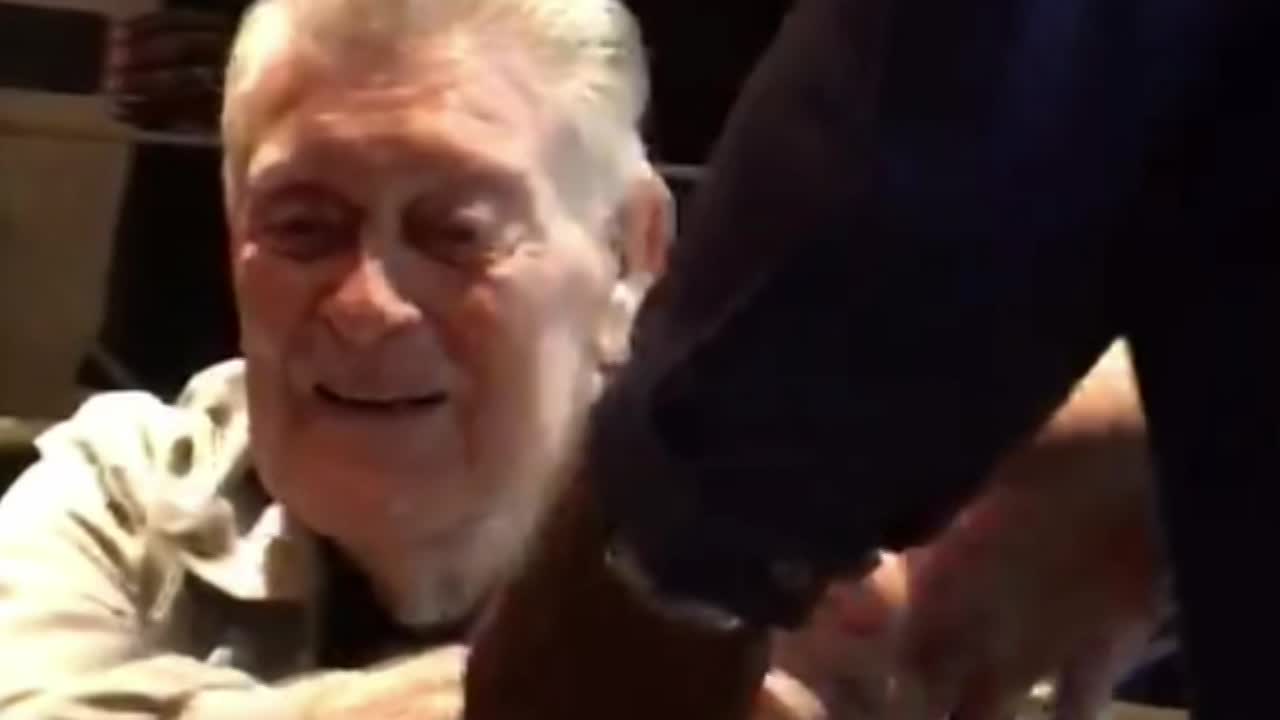 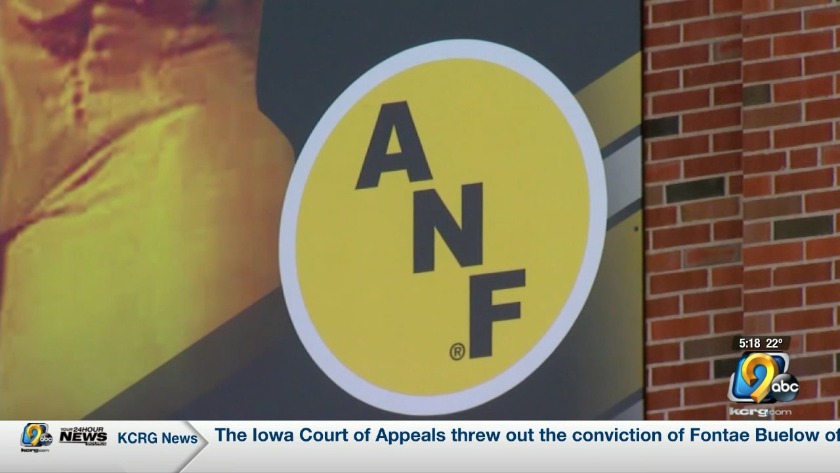 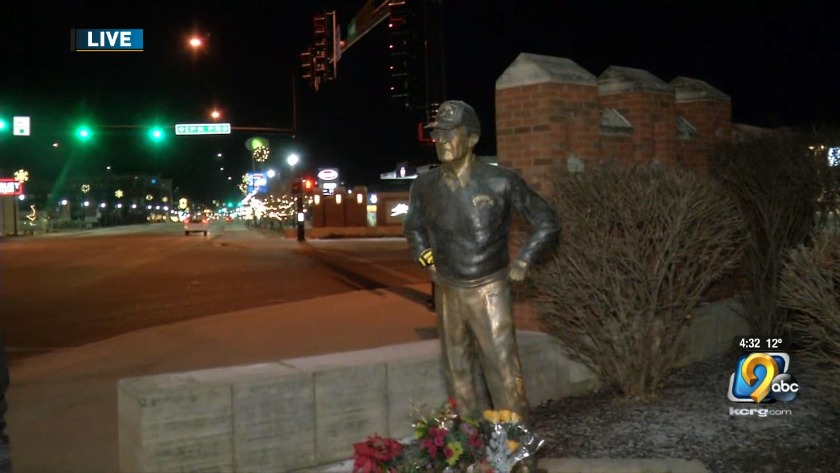 IOWA CITY, Iowa (KCRG) - One of the most important figures in University of Iowa athletics history, as well as college football overall, has passed away, according to multiple sources.

Fry had health issues at various stages of his life, including prostate cancer in 1998, for which he successfully received treatment. His family said that he passed away after a renewed long battle with cancer.

"We are proud to know that our father’s life had a positive influence on so many people, the players, the coaches, and the fans who played for, worked with, and supported his long and successful coaching career. His legend will live forever with the people he touched and inspired, and the programs he led to greater heights," Fry's family said, in a statement.

Upon his hire in 1979 by director of athletics Chalmers "Bump" Elliott, Fry began to immediately erase the memories of two decades of struggles by the Iowa football program. His goal was to replace a culture of losing with a winning one.

"We tried to do away with the uniforms, the emblem, everything that was associated with losing and brought in the new things," Fry said. "The new uniforms, the new environment, the way we came on the field, left the field...to be positive and to be proud to be Hawks. You do that, and you work real hard, then good things happen."

The turnaround was quick: within three years, the Hawkeyes were back to winning and going to bowl games. Following the 1981 season, Fry's team earned the first of three trips to the Rose Bowl during his career.

More big wins came to the program in the years that followed. In 1985, then #1 ranked Iowa beat the #2 Michigan Wolverines on a last-second field goal by Rob Houghtlin to win 12-10. While the Hawks lost to Ohio State two weeks later to lose their top ranking, Fry's team got revenge two years later in Columbus, Ohio, when he won the road game against the Buckeyes in 28 years.

Fry's teams at Iowa in the 1980s were reflective of the man himself: bold, brash, competitive, hard working but still allowing plenty of opportunity to enjoy the game of football. He was responsible for putting the Hawkeyes in those uniforms reminiscent of the Pittsburgh Steelers, the Tigerhawk logo, the "swarm" to enter the field, and the infamous pink locker room meant to calm opponents.

Major college football programs came calling after Fry achieved success at Iowa, though the only one he considered strongly was the position at the University of Southern California. He revealed their interest in him for coach after Iowa's victory in the 1986 Holiday Bowl.

"A lot of the news media in Iowa acted like I'd really done something wrong," Fry said. "I thought it was a real compliment, a team that had more Heisman Trophy winners, more all-Americans than any school in America to offer a coach from Iowa the opportunity."

Fry turned the job offer down, because, as he said, he "loved Iowa more."

His career at Iowa and in college football came to an end in 1998. His emotional press conference announcing his retirement was marked with tears and a favorite saying: "I'll always be a Hawk."

"Iowa Athletics has lost an icon, a man that raised the bar for every Hawkeye program, and every member of our athletics department. Hayden was respected by everyone who knew him. His passing creates a void for all those who played for, coached with, and supported his successful tenure as our head football coach," Gary Barta, athletics director for the University of Iowa, said, in a statement.

Fry has a legendary coaching tree, with 13 previous coaches of his having achieved the role of Division 1A head coach in collegiate football. Current Iowa football head coach Kirk Ferentz was a former assistant under Fry in the 1980s.

“Hayden Fry is a college football icon and an Iowa legend. His Hall of Fame career is well known, but personally, he will always be the man who took a chance on me at the start of my coaching career. I was proud to coach with him and honored to succeed him when he retired. He’s been a great mentor and a true friend. I am forever grateful to him," Ferentz said, in a statement.

Fry previously coached at Southern Methodist University and North Texas State prior to arriving at the University of Iowa in 1979. He made history at SMU by recruiting the first African-American scholarship player to play in the Southwest Conference, Jerry Levias, which Fry considered the greatest thing he ever did in football.

Fry was inducted into the College Football Hall of Fame alongside Levias in 2003.

An annual celebration of Hawkeye athletics called FRYfest is held in Coralville prior to the start of each football season. 1st Avenue in that city was honorarily named Hayden Fry Way, and a bronze statue of him was erected at the Iowa River Landing in Coralville in September 2016.

Memorial services will be announced at a later date.

"With our family at his side, Hayden Fry, beloved husband, father, and grandfather, passed away following a lengthy battle with cancer. We are comforted in our faith and knowing that Hayden is no longer suffering and resides now in heaven with our Lord. Hayden passed on Dec. 17, at the age of 90.

We are proud to know that our father’s life had a positive influence on so many people, the players, the coaches, and the fans who played for, worked with, and supported his long and successful coaching career. His legend will live forever with the people he touched and inspired, and the programs he led to greater heights.

Though Hayden was born in Texas and moved there more recently to be closer to our family, his love for the University of Iowa, his players and coaches, the people of Iowa, and the state of Iowa, is well known. Hayden often shared, “I’ll Always Be a Hawkeye”.

Our family would like to pass along our heartfelt thanks to the caregivers who made Hayden’s comfort their priority.

We cannot thank everyone enough for their love and support. Your thoughts and prayers are truly appreciated.

Memorial Services are pending and will be announced at a later date."