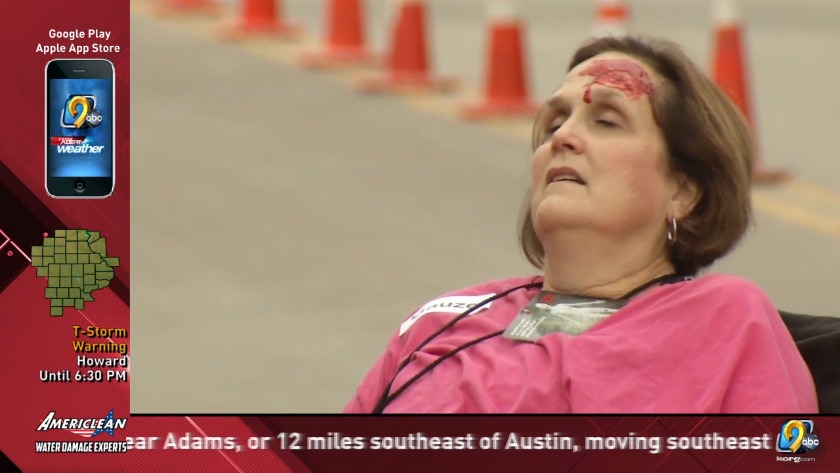 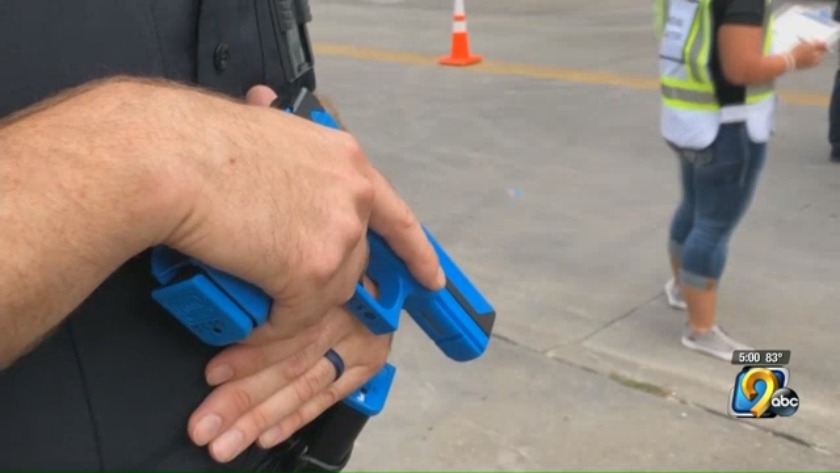 Police, fire crews, and paramedics responded to an active shooter drill at the University of Iowa Campus Wellness and Recreation Center in Iowa City on August 13, 2019. The drill served to help first responders all work together to treat patients in the event of an active shooter scenario. (Randy Dircks/KCRG)

The drill, organized by Johnson County Emergency Management, had police officers from both Iowa City and Coralville participate. It also included fire crews and paramedics to respond to injuries in the "hot zone," referred to as the active location of a threat.

The timing of the drill might seem fitting between the recent mass shootings in Dayton, Ohio and El Paso, Texas, but organizers said it took two years to prepare this particular drill. Seeing those more recent shootings made it all the more important the drill was taken seriously.

At the start, a number of students fled from the University of Iowa Campus Wellness and Recreation Center. Within seconds, police arrived at a scenario they hope to only see in this controlled drill.

"This is an opportunity for us to exercise active shooter response for police, fire, and EMS," Dave Wilson, the Johnson County Emergency Management Director, said.

To some, that exercise brought out genuine concern. Madi Karg, a student from Kirkwood Community College, was volunteering as an actor for the scenario. She said even knowing the drill was controlled, it felt real.

"My whole nervous system kicked in and I was kind of freaked out, and I had forgotten that it was a simulation," Karg said. "Because the gunshots were as loud as an actual gunshot would be."

Twelve people came out acting as if they were injured; their clothes ripped, their bodies were "bloodied" with the help of makeup artists. But fire crews and paramedics responded to those injuries legitimately and quickly, with some of those injured being placed on ambulances.

Sgt. Derek Frank of the Iowa City Police Department said their officers go through training like this regularly, but this brought three groups of first responders together to react efficiently if this scenario became a reality.

"We continue to evolve our tactics and processes and try to get care to the victims as quickly as possible," Sgt. Frank said. "That's what this rescue task force type of training is all about."

That training for these first responders was pivotal as they worked together under fire and a potentially active situation.

"[They're] going in, working in a war zone under law enforcement protection, and treating those patients and transporting them rapidly," Wilson said.

"We ran multiple drills, and we got better every time," Nurnberg said. "We were able to neutralize the threat and help everyone that needed help, and we were able to do it very quickly."

The preparation to respond properly was put to the test. That made this work all the more important, knowing if something happens here, they will be ready.

"It just drives home and reinforces the point that we have to train, and we have to prepare for this thing," Wilson said.

"Twenty years ago, we didn't have this all happen all the time," Karg said. "So if we would practice for it, it'd be like 'oh, this might happen,' but now, this happens. It could happen tomorrow."

"If it does happen in Iowa City, or if it happens in Hills or Oxford, North Liberty, Coralville- if it happens anywhere in this county, that we're ready to respond and we're able to respond well," Nurnberg said.

Sen. Sanders cancels rally at University of Northern Iowa due to impeachment schedule

Sen. Sanders cancels rally at University of Northern Iowa due to impeachment schedule