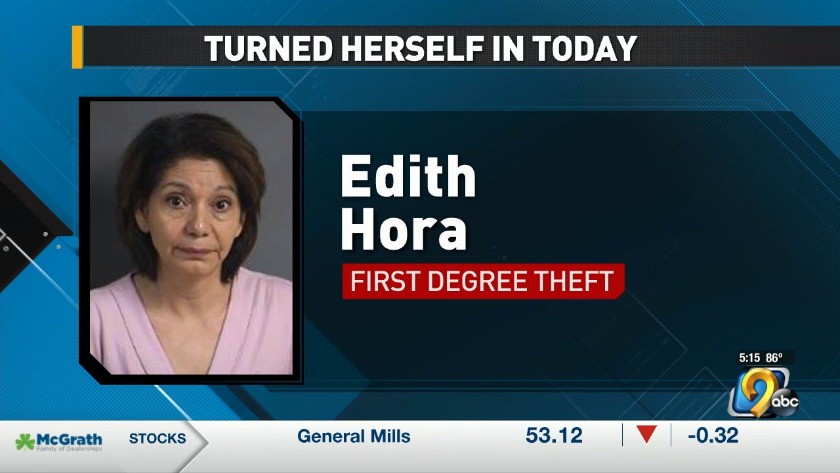 Family members say now, nearly three years after the alleged theft, their sister needs to be held accountable for her actions.

Edith Hora was charged with first degree theft after turning herself into the Iowa City Police Department Monday morning. First degree theft is a Class "C" Felony that carries up to a ten year prison sentence. Hora turned herself in while TV9 was in the process of speaking with Hora's sister and brother-in-law about the alleged theft.

Judy and Tim Morrison have spent years collecting documents and working with attorneys in an effort to figure out what happened to a large sum of money that was in her mother's savings account.

Judy Morrison said her mother was not educated, and Tim Morrison said documents show his mother-in-law was educated at "about a 2nd grade" level, and was learning to read and write through Kirkwood Community College.

"She never went to school, she didn't understand money or percentages or anything along that line either," Judy Morrison said. "She couldn't tell the difference between $90,000 and $900,000."

Court documents say on the day Josefina Herrera Sexton died, her daughter Edith Hora allegedly withdrew and transferred money to her own account. She then went against her mother's will, and deprived her father from receiving 70-percent of that sum.

"They put a will in place because they wanted their wishes taken care of when they passed away," Judy Morrison said. "And because Edith got involved with things, she changed the will in 2015 so that way it benefited her, and mostly just- I was the type of person that said: 'it's my sister, it's not going to happen to my family.'"

Court documents say Hora alleged transferred the money for a number of accounts, including transferring more than $200,000 to her husband's trucking business.

The Morrisons said they realize getting the money back could prove an uphill climb- but Tim Morrison said at this point, the most important thing is to share their story to potentially avoid other families from going through something similar.

"If you commit a crime against the elderly, or anybody, you should be held accountable for those actions and take penalties for that," Tim Morrison said. "And so we're trying to get the word out, we're trying to fight more against elderly abuse. Financial and otherwise."

"There's a couple things that transpired during this whole mess that I think laws need to change in the state of Iowa in order to protect elderly so it doesn't happen to somebody else," Judy Morrison said.

"This word needs to get out there," Tim Morrison said. "That's why we're hoping to partner with the Kasem Cares Foundation and really partner with them to get the message out there: turn abuse in."

"This just seemed to easy," Tim Morrison said. "And we were just blown away that they were able to just tell people or just sign and falsify stuff and nobody bothered to check a thing, and that's how all this happened."