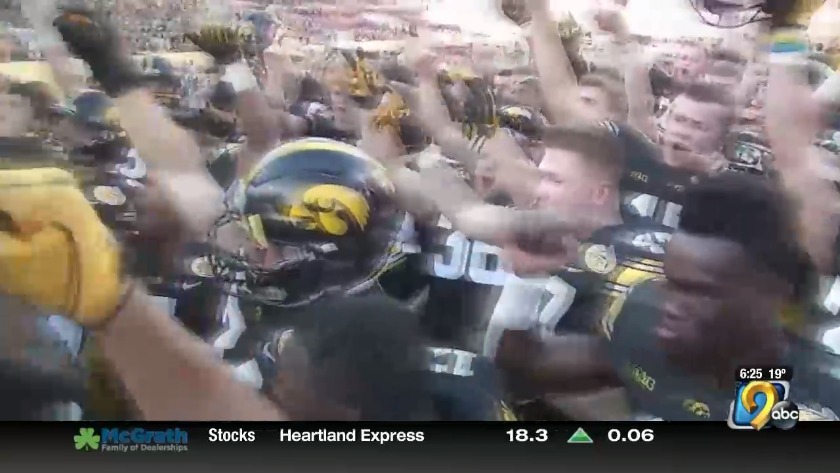 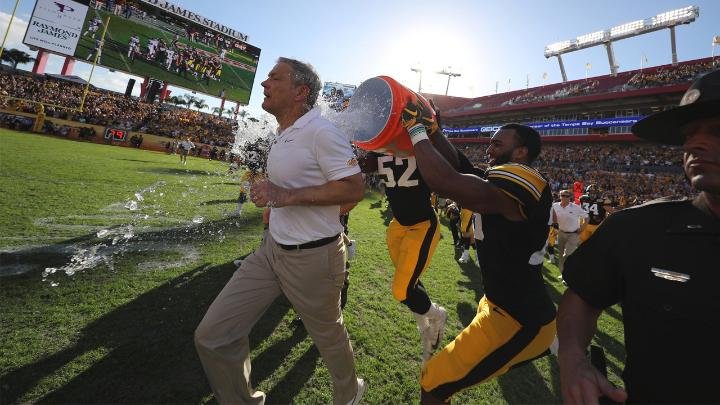 TAMPA, Fla. (AP)- Safety Jake Gervase made an interception in the end zone to help preserve a late lead, and ball-hawking Iowa Hawkeyes beat No. 18 Mississippi State in the Outback Bowl 27-22 Tuesday.

Gervase also batted down an errant fourth-down pass to end the Bulldogs' final drive at the Iowa 32 with 25 seconds left. Two earlier Mississippi State threats in the fourth quarter led to only three points.

The Hawkeyes totaled just 199 yards, with 75 coming on a touchdown pass from Nathan Stanley to Nick Easley, but they converted three takeaways into 17 points.

Stanley threw for 214 yards and three scores. The Hawkeyes won despite netting minus 15 yards rushing, and their three running backs totaled 4 yards in 15 carries.

Iowa (9-4) earned its biggest postseason victory since an Orange Bowl win over Georgia Tech to cap the 2009 season. Mississippi State (8-5) lost to a team outside the top 15 for the first time.

Trailing 24-19, the Bulldogs had a first down at the Iowa 1 early in the fourth quarter, but three quarterback draws lost 2 yards and they settled for a field goal.

They were again on the verge of taking the lead with nine minutes left, but receiver Stephen Guidry bobbled a pass in the end zone, and Gervase snatched it away. The Hawkeyes then drove 50 yards for a field goal to go up 27-22.

The Hawkeyes scored two touchdowns in 97 seconds for a 17-6 lead. The Bulldogs rallied with two touchdowns in 18 seconds to go up 19-17, with quarterback Nick Fitzgerald giving them the advantage on a nifty 33-yard touchdown run — his 100th career score rushing or passing.

But on their next possession, Fitzgerald's tipped pass was intercepted by defensive lineman Chauncey Golston. Stanley then scrambled to convert a fourth and 1, and on the next play he hit Easley to put Iowa ahead to stay, 24-19.

The Hawkeyes won because they kept the game close early despite a slow start. They trailed only 6-0 after one quarter even though they had minus 8 yards and a 12-yard punt.

Mississippi State tried some trickery in the first quarter by throwing down the middle to quarterback Keytaon Thompson, but he dropped a potential touchdown pass and the Bulldogs settled for a field goal.

The Bulldogs had 90 yards in penalties while Iowa had none. Targeting and unsportsmanlike conduct penalties on Mississippi State jump-started the Hawkeyes' offense and led to a field goal for their first score. A 51-yard completion for the Bulldogs was negated by a holding penalty.

The Bulldogs, who allowed only 12 touchdowns in the regular season, gave up two in quick succession in the second quarter.

First Easley slipped several yards behind the secondary to catch Stanley's long throw in stride. The touchdown pass was the 50th of Stanley's career — and his longest. It was the longest play allowed by the Bulldogs this season.

Two snaps later, A.J. Epenesa's strip sack of Fitzgerald gave the Hawkeyes the ball at the 13, and they scored on Ihmir Smith-Marsette's touchdown catch for a 17-6 lead. The fumble lost was Fitzgerald's first in 511 carries.

Iowa will likely finish in the Top 25 for only the second time in the past nine seasons. Coach Kirk Ferentz concluded his 20th season at Iowa and improved to 152-101, including 8-8 in bowl games.

The down-to-the-wire finish was a rarity for the Bulldogs, who had only one other game decided by fewer than 14 points.

Stanley will be a third-year starter returning to lead the 2019 Hawkeyes, who also will have their top three rushers back. They open the season Aug. 31 at home against Miami (Ohio).