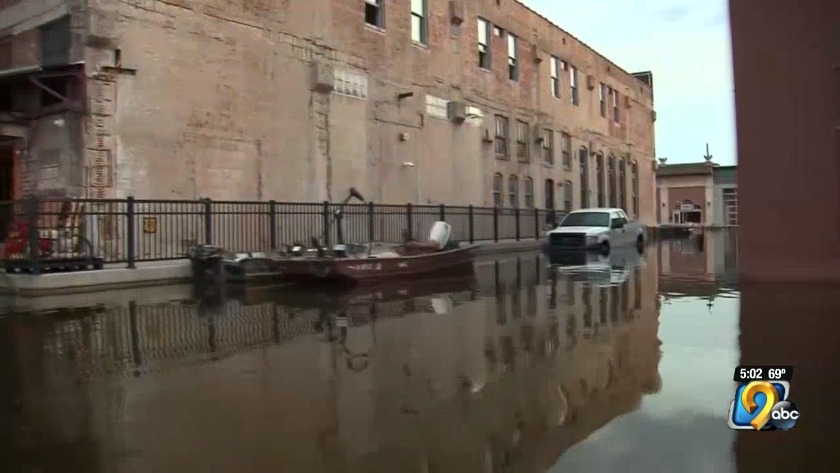 DAVENPORT, Iowa (AP) — Officials in Davenport say the city is building a bigger flood barrier in the wake of a breach in April that sent floodwaters rushing into downtown streets.

View from the upper level of a building as water inundates areas near 2nd Street and Pershing Avenue in downtown Davenport on April 30, 2019 (Credit: ABC/Twitter @2dorks)

The city will build larger flood walls when there is a high probability the river cresting above 21 feet, Davenport City Administrator Corri Spiegel told the Quad-City Times . Days after the city's first temporary barrier broke on April 30, the river hit a historic crest of 22.7 feet.

As of Thursday, the Mississippi River at Davenport was at just over 20 feet (6.1 meters), more than 5 feet (1.52 meters) above flood stage. But the National Weather Service projects the river will crest at 21.5 feet (6.55 meters) on Saturday.

Davenport's downtown sits on the banks of the river, with no permanent floodwall. Instead, the city has an expanse of riverfront green space and temporary barriers, called HESCO barriers, consisting of large, sand-filled containers.

Spiegel said the public works department could not safely add a second layer to the last flood wall holding back the Mississippi River because of extreme pressure.

"Such efforts could have compromised the existing wall and pump set ups," she said in an open letter on the city's website. "As crews build a new wall now, they are taking extra precautions to set up a bigger, heavier wall to hold the river back."

An investigation by the barrier's British manufacturer of the breached barrier found no structural fault with it. Receded floodwaters revealed new evidence showing the road underneath the barrier remained undamaged, suggesting the Mississippi River rose above the flood barrier.

Earlier this month, a local business group estimated the economic toll from April 30 breach of that temporary system could run as high as $2.5 million a month. That number doesn't include property damage, just the loss from shuttered businesses.