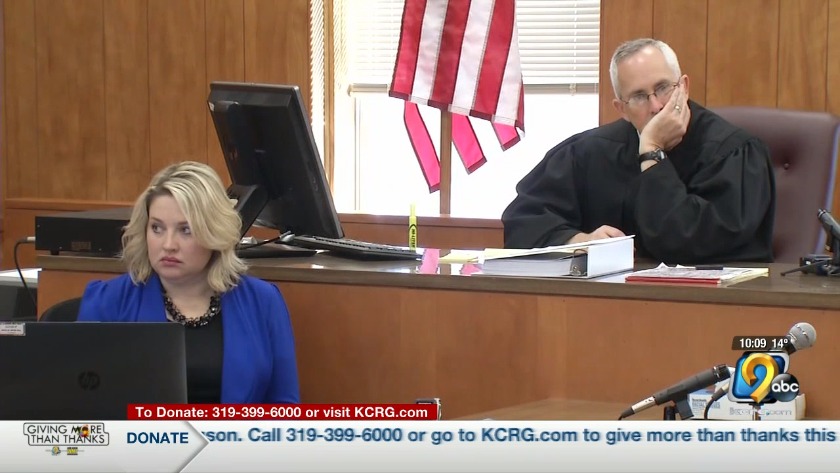 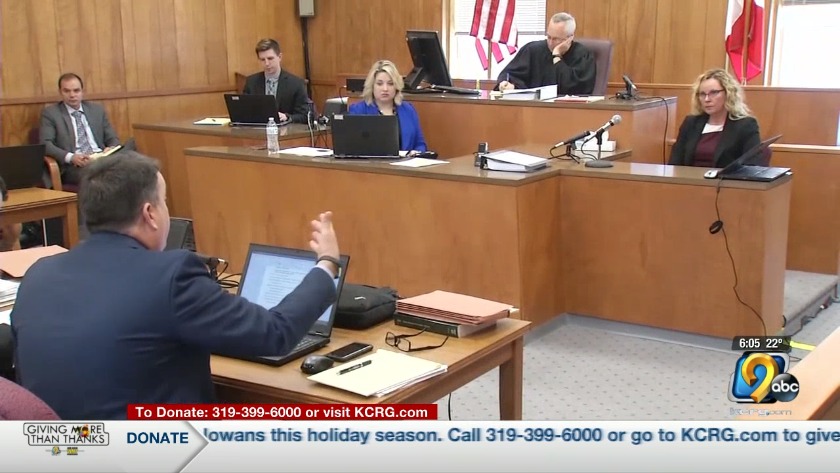 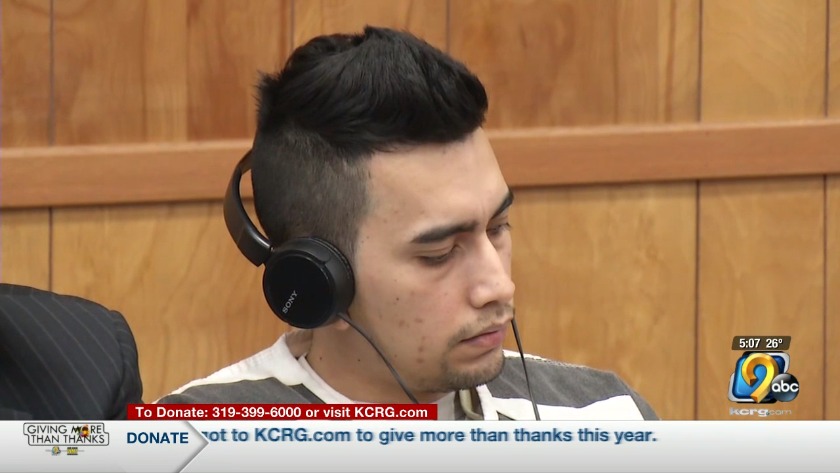 MONTEZUMA, Iowa (AP) — A confession by the suspect in the death of University of Iowa student Mollie Tibbetts is not reliable because he was sleep-deprived and susceptible to coercion after hours of questioning, a defense expert testified Thursday.

Cristhian Bahena Rivera is lead into the courtroom for his initial court appearance, Wednesday, Aug. 22, 2018, at the Poweshiek County Courthouse in Montezuma, Iowa. Rivera is charged with first-degree murder in the death of Mollie Tibbetts, who disappeared July 18 from Brooklyn, Iowa. (Jim Slosiarek/The Gazette via AP, Pool)

Brian Leslie, a consultant with expertise in interrogation techniques, said he reviewed video of the 11-hour interrogation of Cristhian Bahena Rivera that took place in August 2018. He noted that the suspect denied involvement in Tibbett’s disappearance until near the end, around 4 a.m., after he had been falling in and out of sleep.

Leslie said Rivera, who had worked his shift at a dairy farm and had been awake for 24 hours, was vulnerable to suggestions that police had strong evidence and would help him if he confessed.

“Based on the sleep deprivation aspect and the amount of various techniques that were used, I would in my opinion not take a lot of what was said as credible,” Leslie said.

Leslie testified at the end of a two-day hearing on Rivera’s motion to suppress his confession, which his lawyers argue was the product of an improper interrogation. Judge Joel Yates said he would take the matter under advisement and rule “as quickly as I can.”

Rivera, 25, is charged with first-degree murder in the death of Tibbetts, who disappeared while out running in Brooklyn, Iowa, in July 2018.
Rivera, a Mexican national who was living illegally in the United States, is scheduled to stand trial in February and faces life in prison if convicted.

His lawyers declined to call Rivera to testify after Yates ruled that he should be cross-examined about his claim that he didn’t understand certain legal rights and was scared to invoke others.

At the end of the interrogation, Rivera told police he followed Tibbetts while she was running. Rivera didn’t describe how she was killed, claiming that he “blacked out,” but he said he bloody body in his trunk.

An autopsy found Tibbetts died from sharp force injuries. No murder weapon has been found.

Brown noted that Rivera was able to lead officers after the interrogation several miles to the cornfield where her body was found. He noted that DNA testing proved blood found in the trunk of Rivera’s car came from Tibbetts.

Leslie said it was unusual that a deputy who drove with Rivera to the cornfield didn’t turn on the camera in his car.

Multiple officers testified that Rivera asked that he be taken to his home so he could orient himself before he directed them down several roads to the field where the body was found underneath leaves.

Police questioned Rivera after tying him to a car that was seen on surveillance video circling Tibbetts while she ran. They took him in for questioning on Aug. 20, 2018.

Police argue that Rivera voluntarily agreed to be interviewed. After six hours, they put an immigration detainer on him after the discovery of blood in his car. An officer gave him an incomplete Miranda warning before questioning resumed for hours.

Prosecutors concede that some of his statements are likely inadmissible due to the botched warning. But they argued that evidence related to the body should be admissible, claiming it would have been found eventually.

Defense lawyers argued that the entire 11-hour interrogation was tainted.

Two of Rivera’s relatives testified Thursday that they were denied access to him when he was being questioned. His aunt, Alejandra Cervantes Valle, said an officer at the sheriff’s office advised her that he wouldn’t need an attorney.