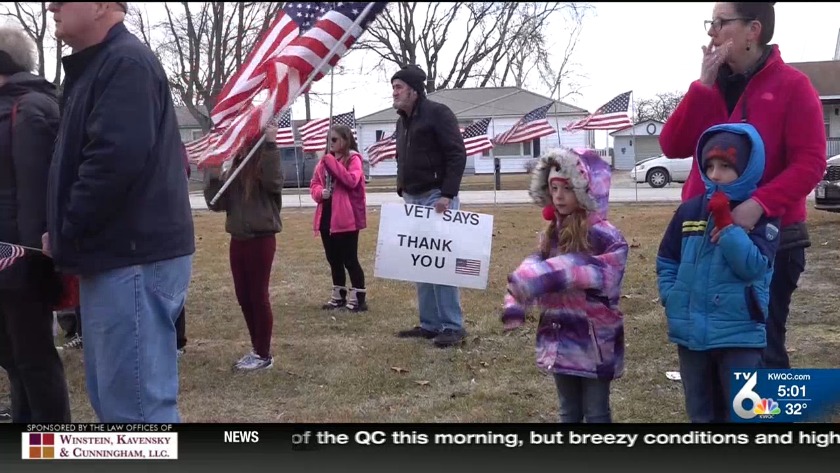 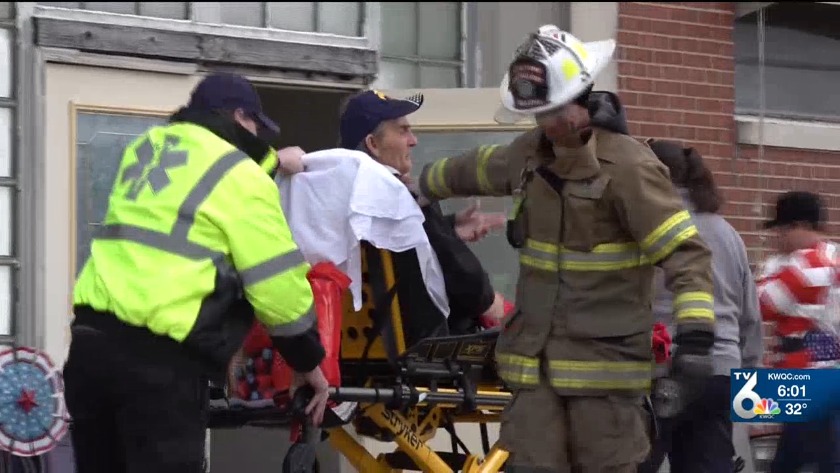 "Larry the Flagman" gets special escort back home

LITTLE YORK, Ill. (KWQC/Gray News) - An escort for Illinois' "Larry the Flagman" went from the University of Iowa to Little York on Wednesday afternoon. Larry Eckhardt has placed nearly half a million flags around the U.S. to honor fallen service members, police officers, and firefighters.

Larry Eckhardt has placed nearly half a million flags around the U.S. to honor fallen service members, police officers, and firefighters. Eckhardt has been battling throat cancer and it recently took a turn for the worst.

Eckhardt has been battling throat cancer and it recently took a turn for the worst. He had been at the hospital in Iowa City for nearly a month. At the end of February, he got the chance to return home with a police escort from the hospital.

Several people came out to watch as the ambulance carrying Larry made its way there, including Cheryl Shagena who met Larry last year, "his mission was to have the flags for veterans and first responders. He's made a difference and we saw what he did. We appreciate for what he did. His mission isn't over."

The night before Eckhardt was discharged, about two dozen volunteers came together to line 1.5 miles of road leading to Larry's house with flags. Then, he got to see his apartment surrounded by those who look up to him. "I had no idea it was a one-man show. I don't know how or what it would look like, but I don't want to see this end with him. I really hope that somehow we can home together and keep his flags going. Not just in his memory but in every vet's memory," said Jessica Cansino who helped put up flags on Tuesday night and brought her 7 kids to honor Larry.

Eckhardt placed about 497,000 flags around the United States for others. His friend Rick Otey has volunteered with Larry various times. "In 2005 he went to a military funeral and he didn't think there were enough flags there. So he bought 50. Then 50 more and now has a neighborhood of 3,000 flags. He's built really something that is awesome because it's important for us to honor our fallen heroes," said Otey.

Those supporting Larry Eckhardt were his friends and some who had only heard of him like Cansino whose friend told her about Larry the night prior. "I think every one of our vets needs to see this and we neglect them. And that's something our friend and I want to instill. We can't forget them, what they do and their sacrifices," said Cansino.

Cheryl Shagena met Eckhardt last year when she volunteered with him in Muscatine for Devin Estabrook's funeral: "I spent about 2 hours sitting with Larry just visiting. He didn't want it to be about him. He stayed outside. So I got that opportunity to sit and visit and know how humble his heart is. He didn't want anyone to know he was in the marines."

As "Larry the Flagman" got out of the ambulance, he could hear "we love you, Larry!"

"He's still alive. He's still kicking. He's a marine, he's gonna kick as long as he can. He's in hospice but don't count him out yet," said Shagena.

Eckhardt served as a marine in the '70s. For the past 15 years, he's volunteered his time to honor other veterans. Larry is now resting in his apartment and knows he and his flags will not be forgotten.

He has played a major part in honoring fallen first responders including Lieutenant Eric Hosette who died fighting a fire in Clinton in January of last year.

Eckhardt's family asks if you want to help, you can send donations directly to Farmers Merchants Bank of Illinois made out to "The Flagman." You can call at 309-584-4146 or email welch@fmbankil.com. All money will be put towards medical expenses directly from said account by the bank.

Read the original version of this article at kwqc.com.

Trump: No quarantine, but travel advisory for NY, CT and NJ

Trump: No quarantine, but travel advisory for NY, CT and NJ